It's time for the LAST camper renovation post! Our next post will be the long awaited... before and after photos! In this post, we are putting in the new flooring! We used floating vinyl planking from Lowe's. We chose to use this flooring because it was light, easy to install, and would "move" with the camper as it shifted when driving down the road. We decided to do the back room and bedroom in a light gray color, and do the living room/kitchen area in a darker flooring. We love the choices we made! Read along and enjoy the many photos I took during the process! 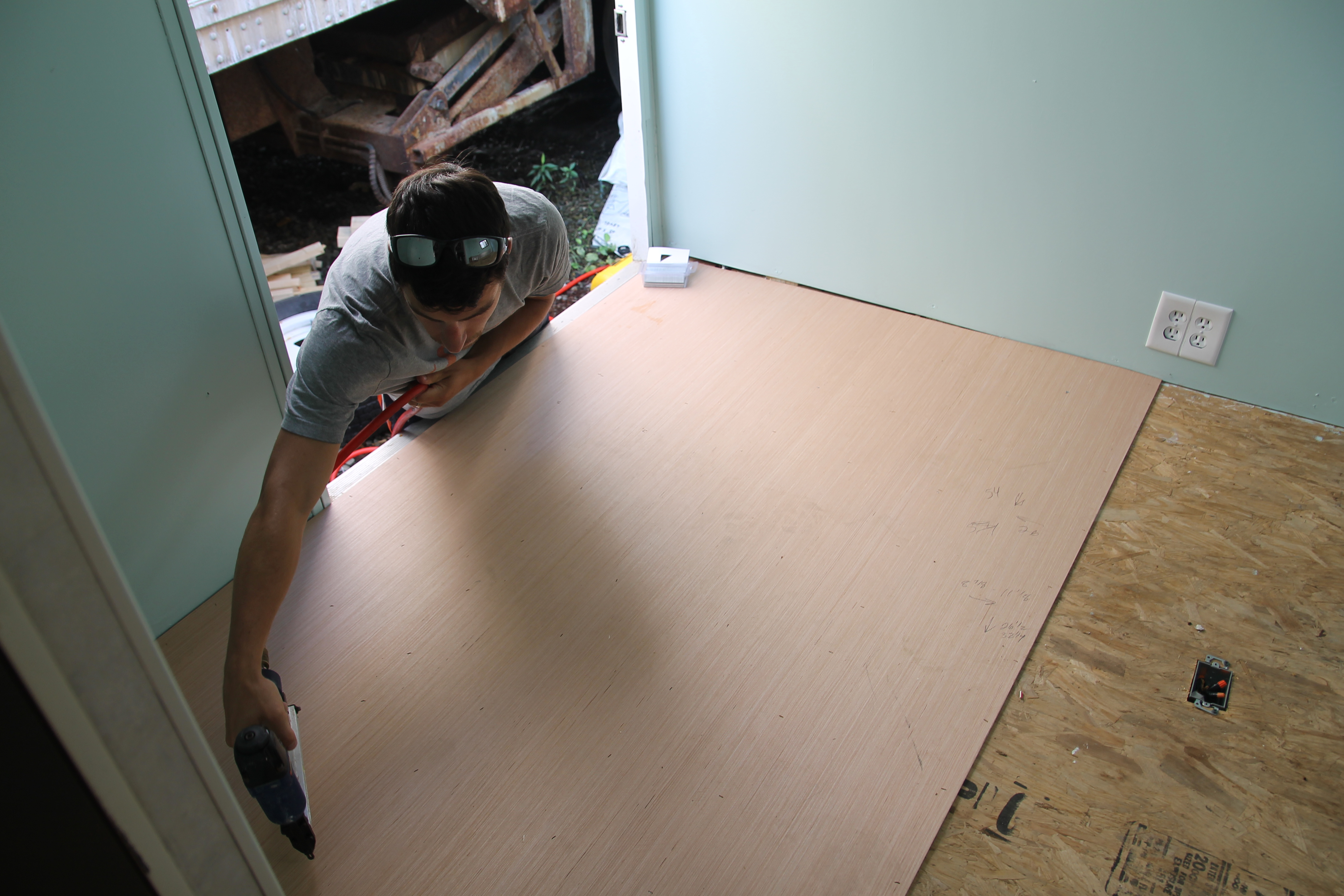 My dad and Luke decided to put down luan board on the entire floor to create a good, level foundation for the planking. There were some spots in the floor where the manufacturers didn't match the plywood up well, so they were kind of weak and unstable. This did the trick and it was a lot easier to put the flooring down on top of it! They used a thinner Luan board which  kept the camper nice and light. 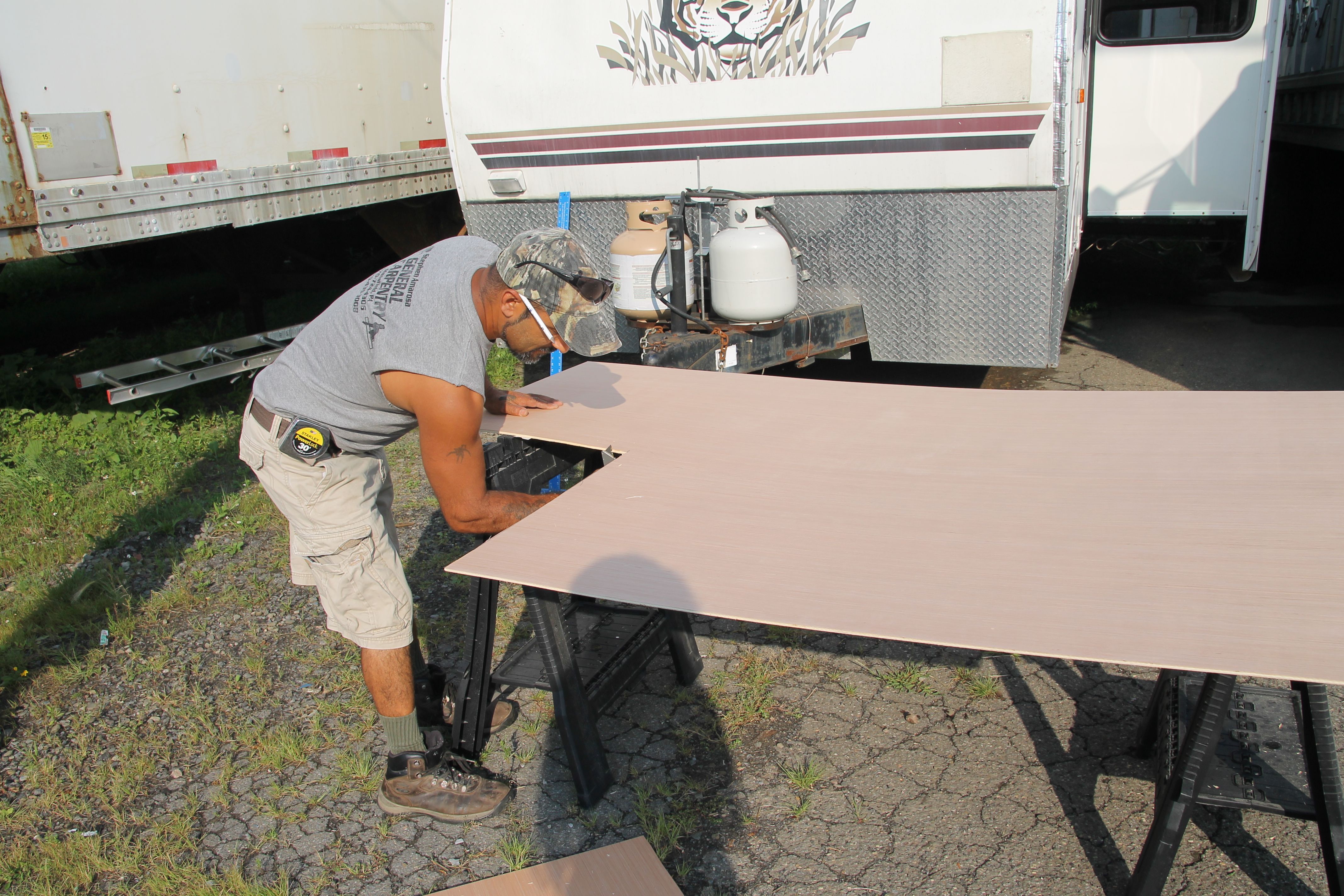 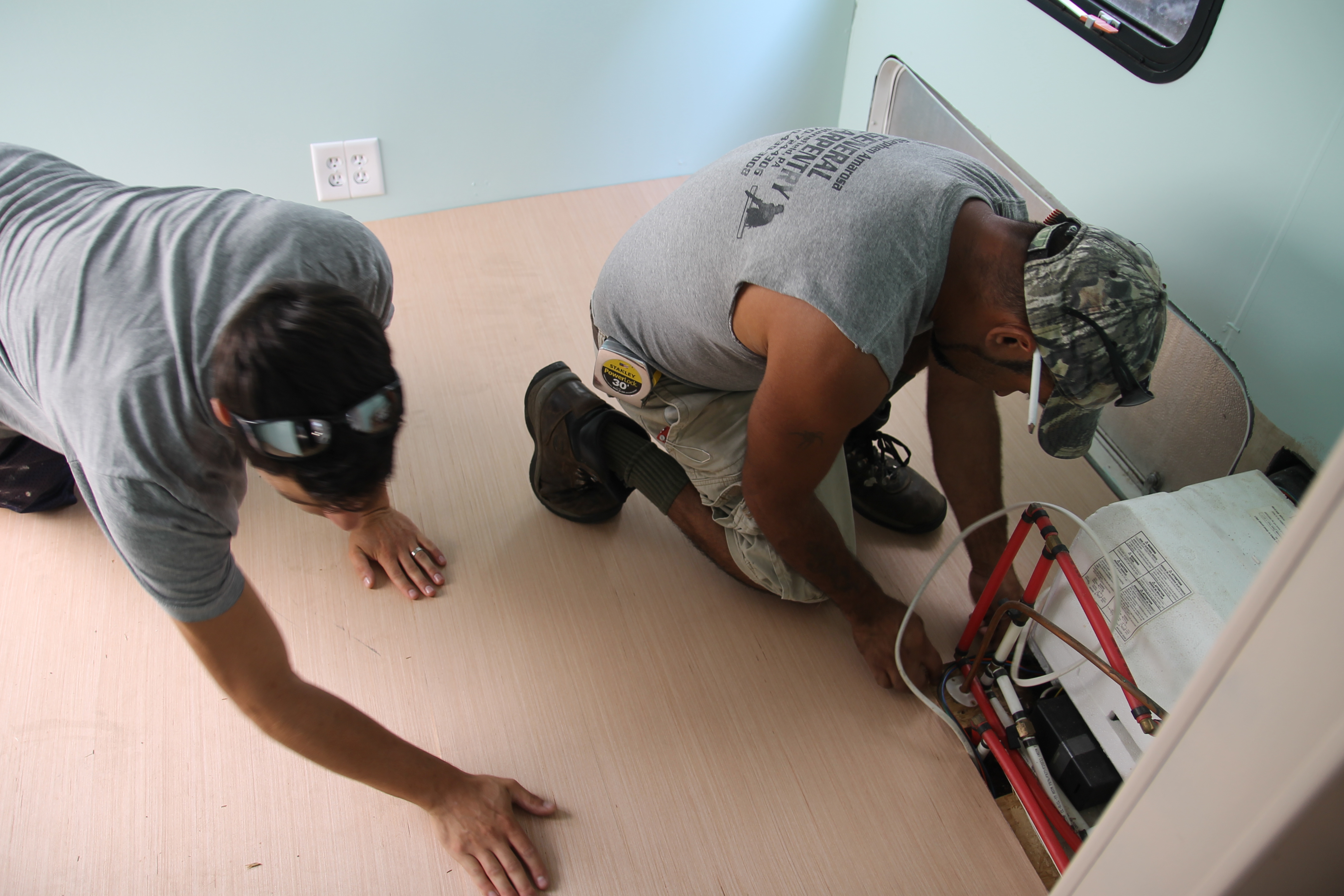 As you can see, they had to work around that pesky water heater in the back room, which was annoying but they made it work! You will see in our after pics that we covered it up with some shelving, so you don't have to see it's ugliness anymore! 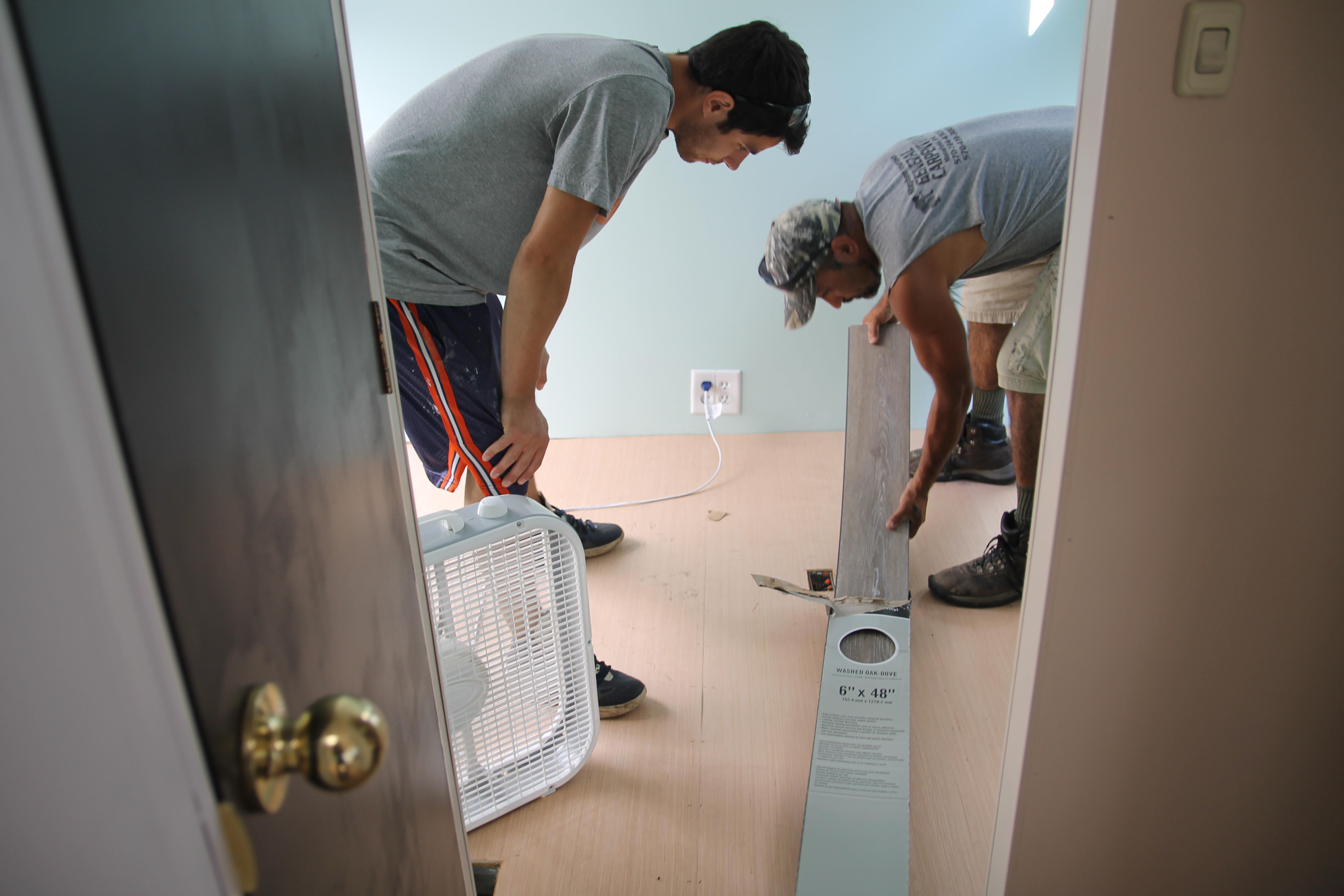 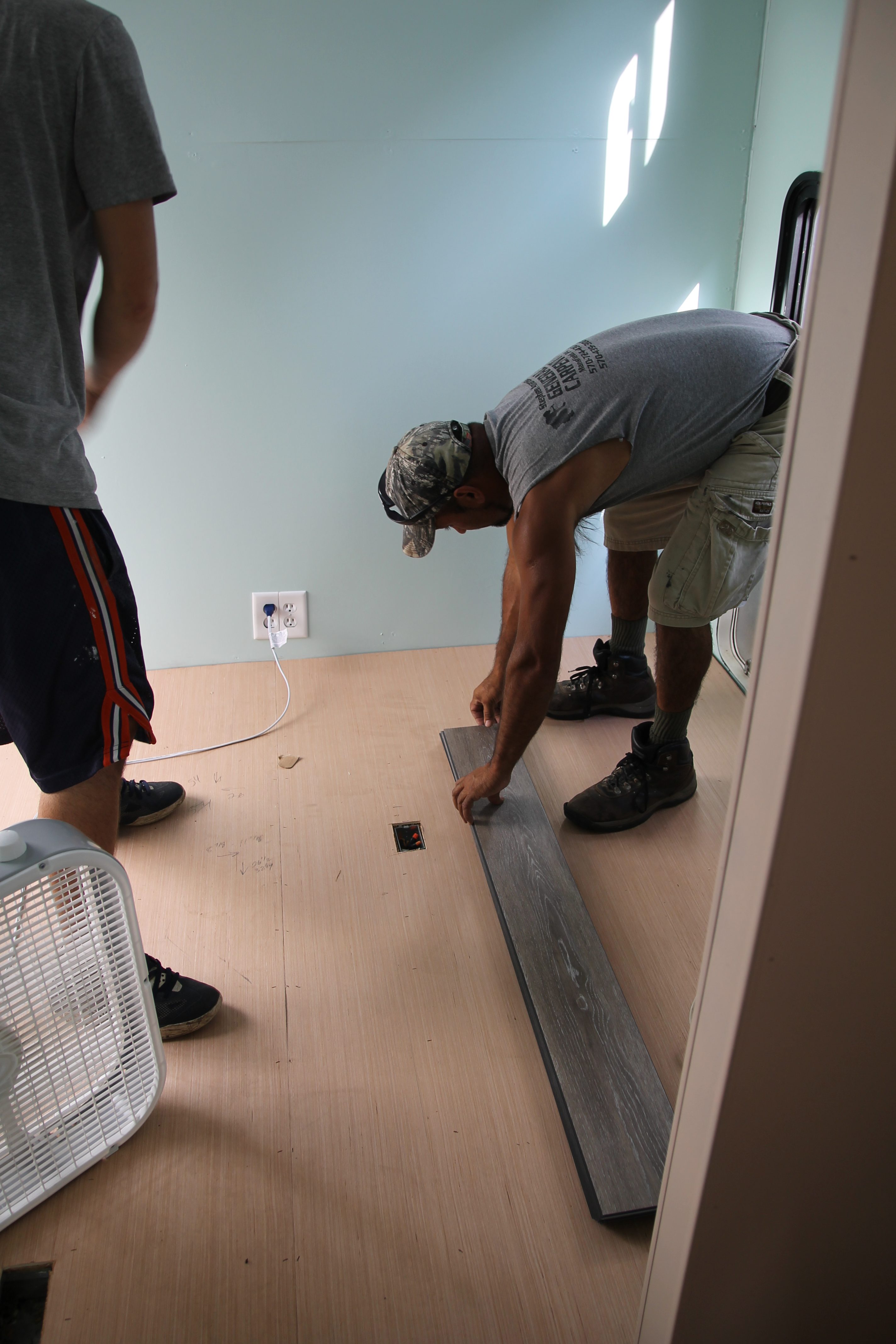 I helped/complicated the process by opening a few boxes and pre-laying out the floor so I would like the coloring and pattern in the end. A word of caution... this lighter gray flooring had a lot of the darker gray pieces in a row in the first few boxes, which I didn't like as much. It took until the 3rd or 4th box before the lighter pieces started coming out. We honestly thought we might have gotten some of the wrong boxes that didn't match, but it was how they fell in the printing process must be. They did end up pulling the darker pieces up for me and starting over after they had about 1/3 of the room done because it just wasn't looking right! We saved the darker pieces for the bedroom. 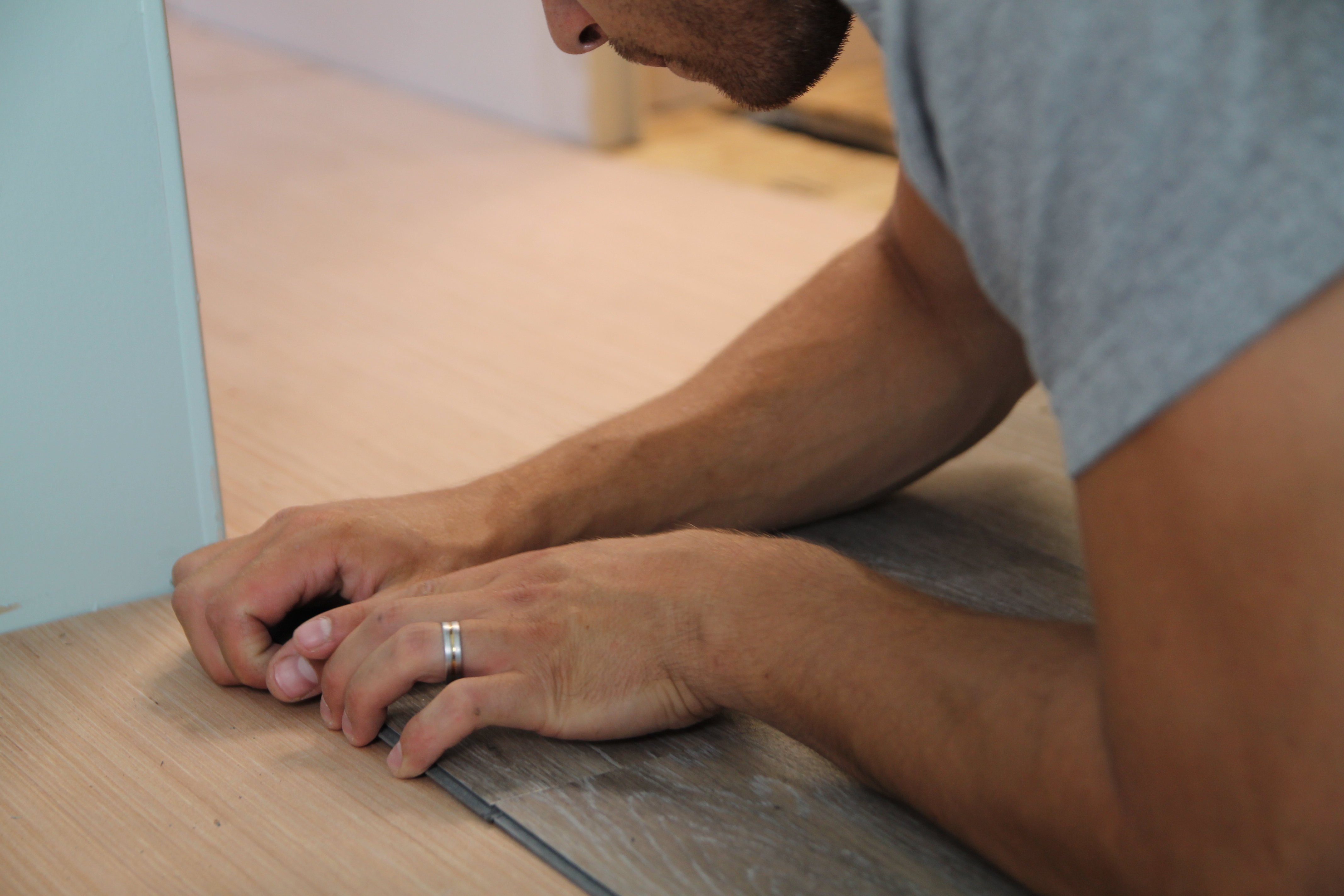 This was Luke's first time laying this type of flooring... it was pretty easy! 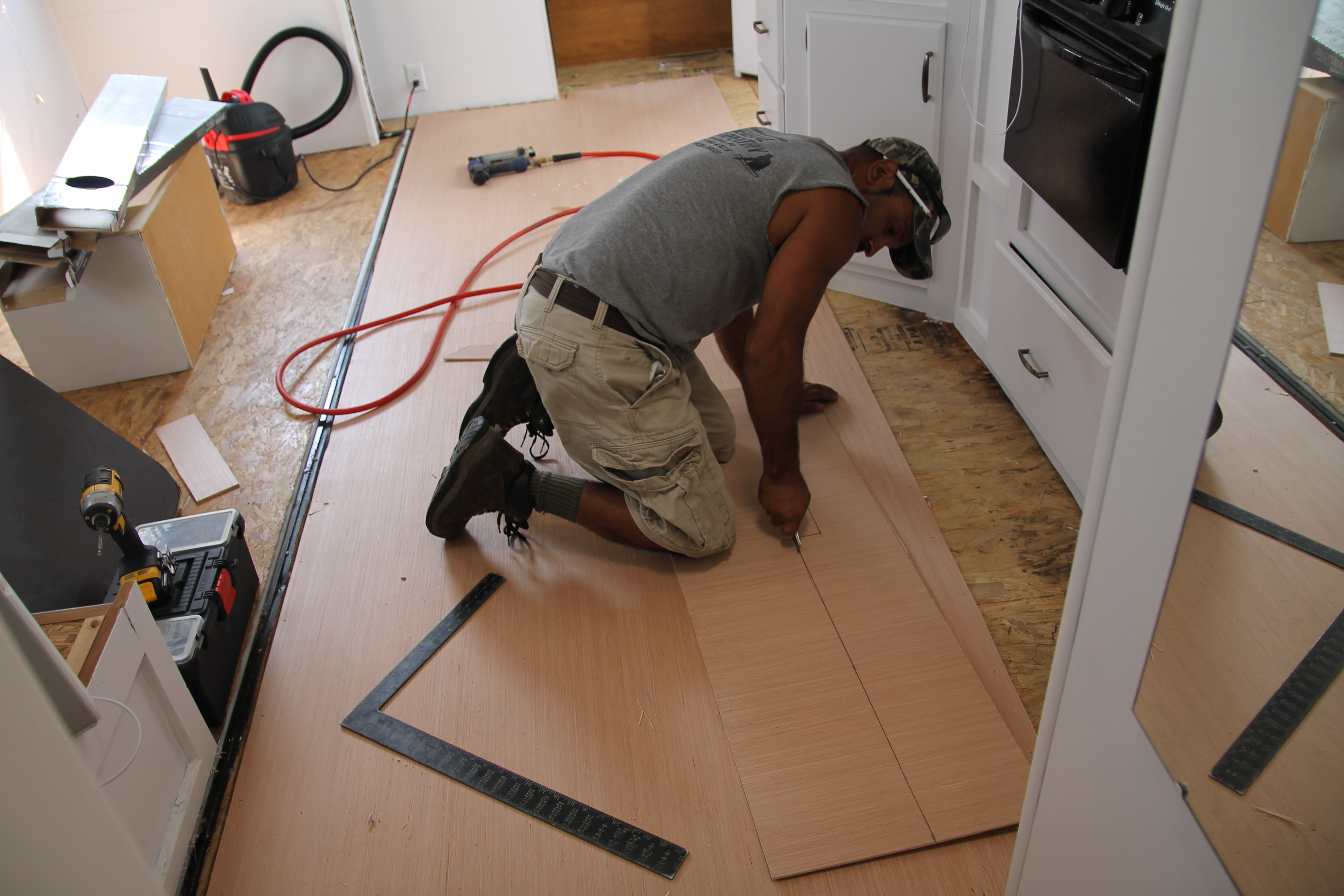 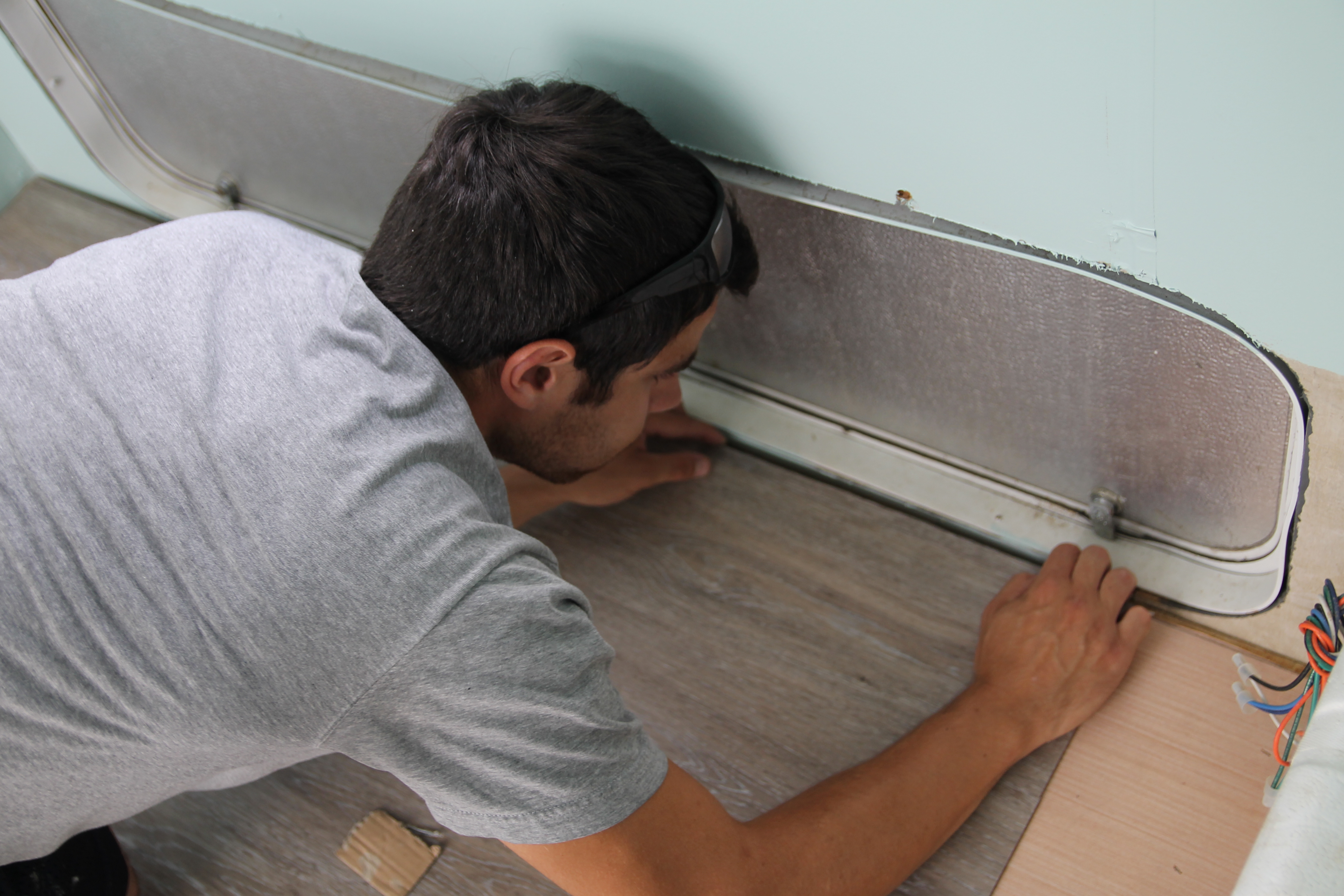 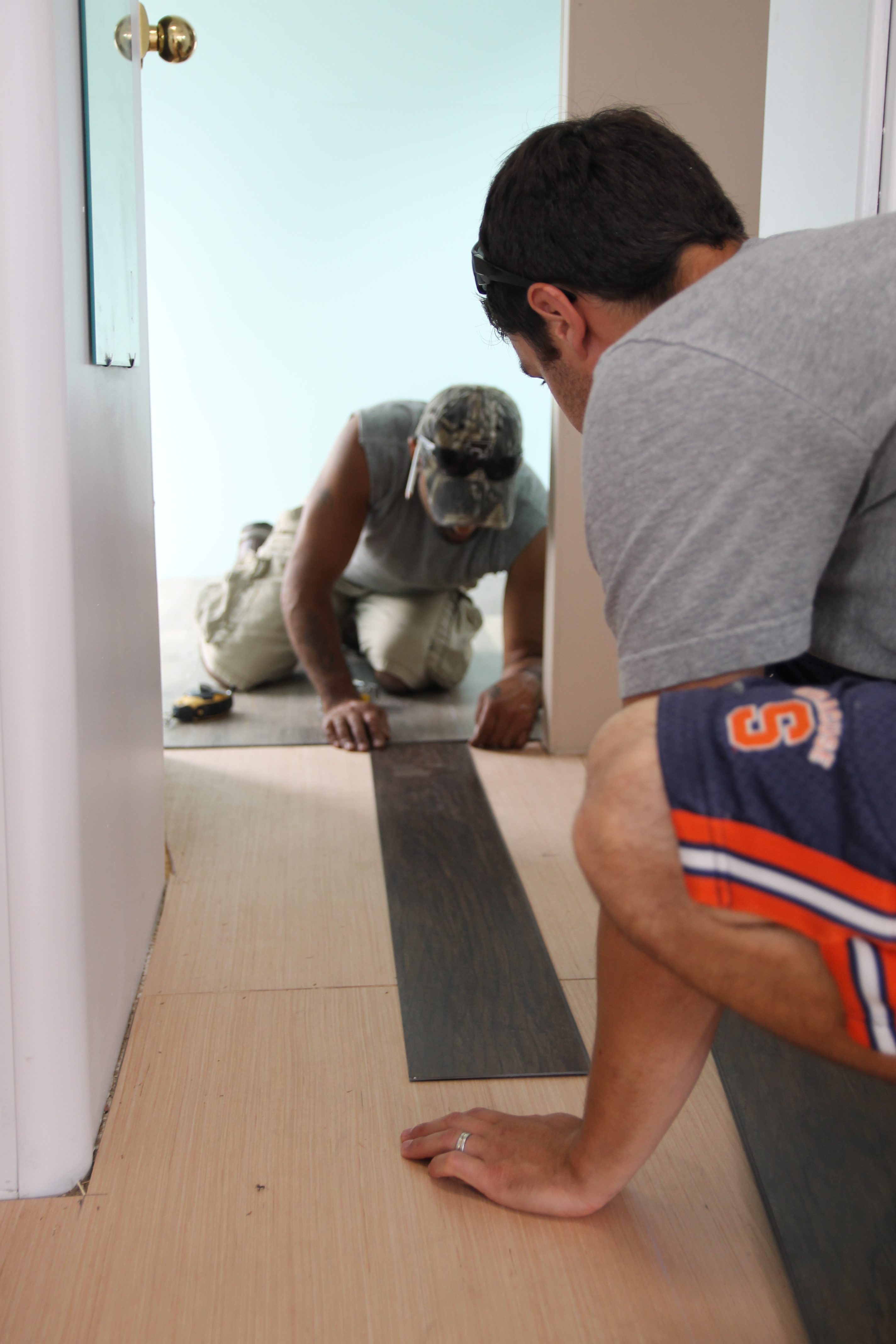 After doing it this way, we would recommend doing the same flooring throughout the entire house, since matching up the two floors was kind of annoying. We also learned that running the same flooring throughout the house makes the house seem bigger, which we ended up doing in the tiny house we are currently living in! I personally liked having the darker and lighter floors, but if you want the process to be easier I would not recommend it! They nailed down a transition piece to cover up the spot, which you can see in later photos. 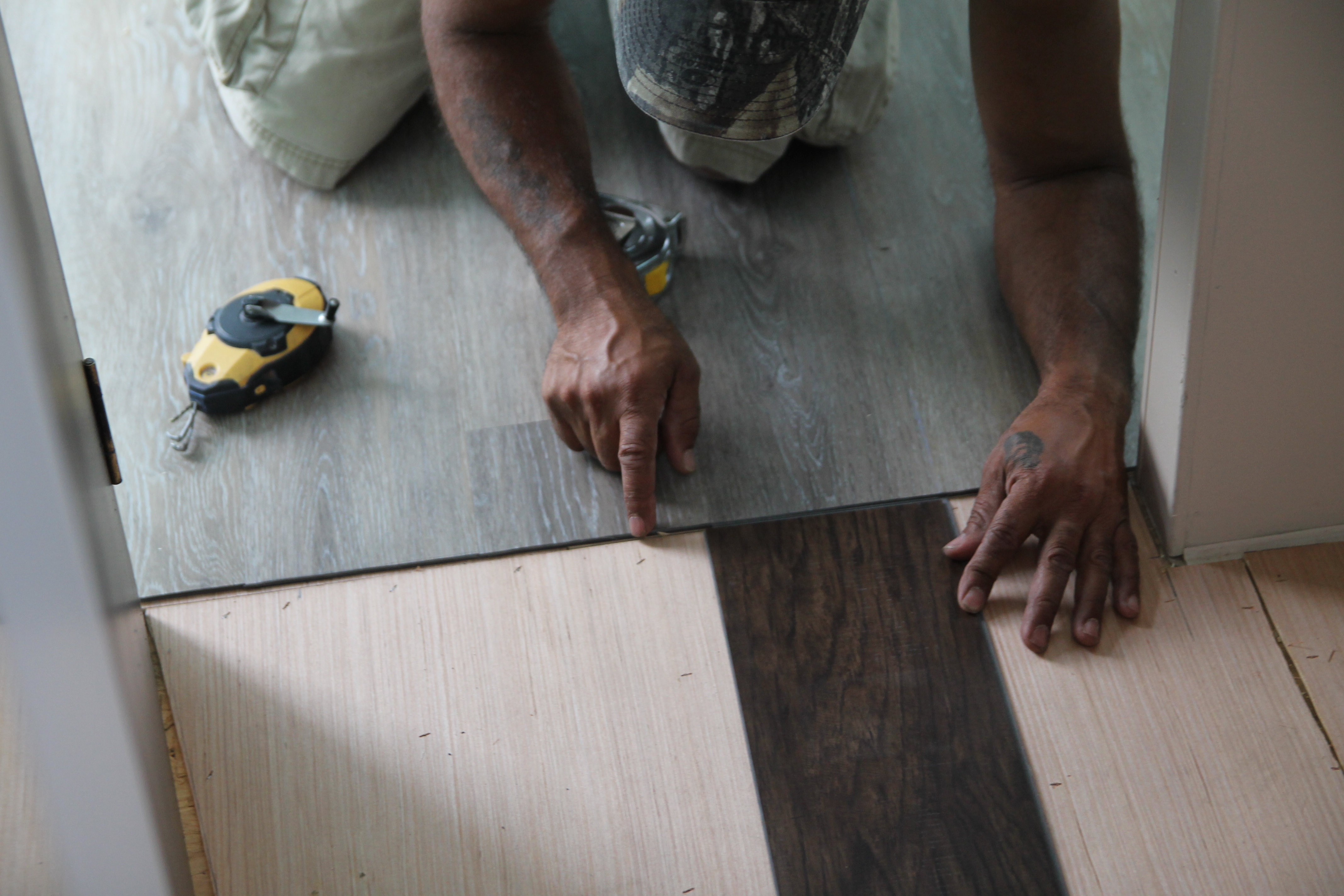 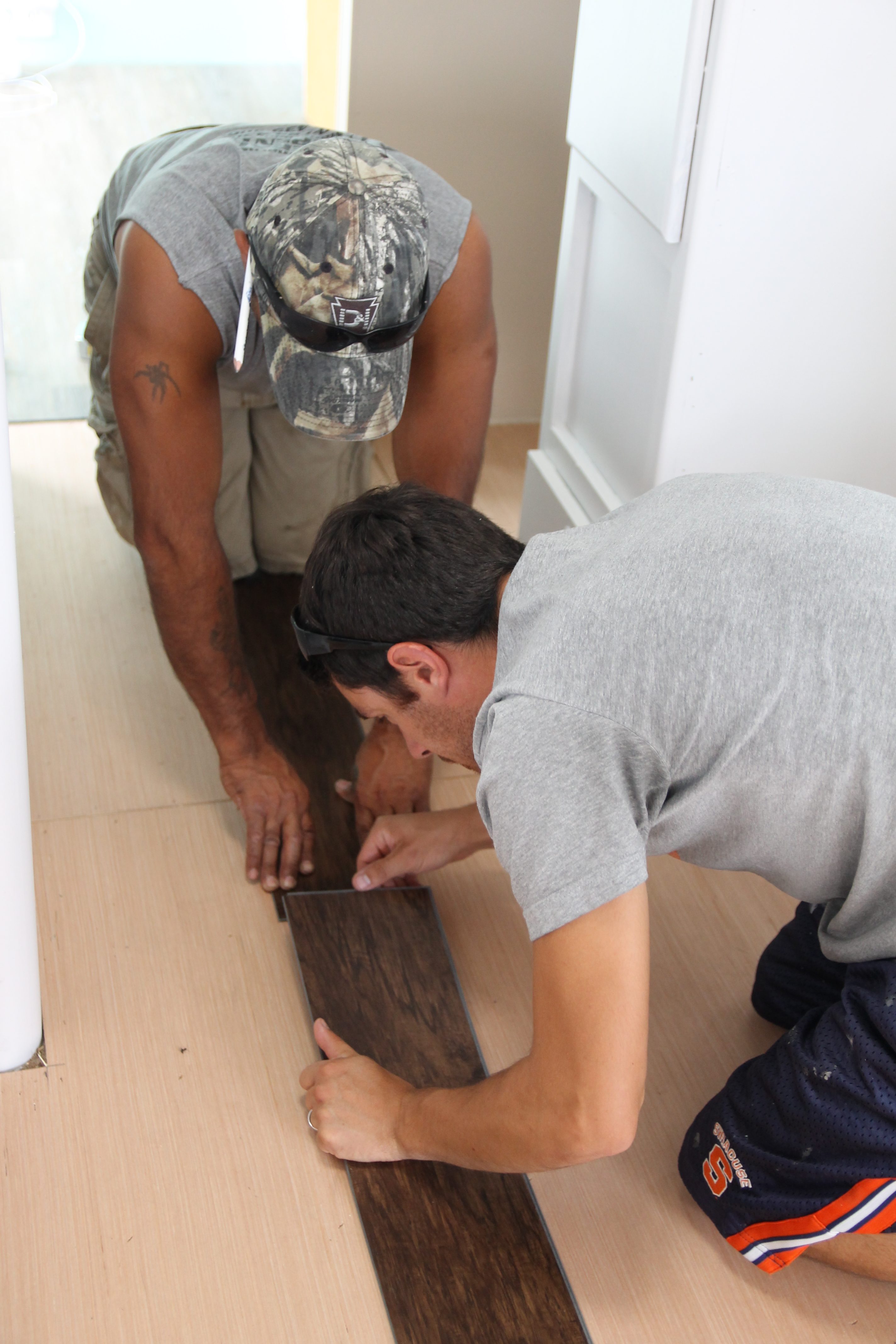 The darker flooring was so much easier to lay since the designs on it were so similar. I absolutely love this flooring still, even though I was originally looking at a darker brown one. It grew on me for sure! 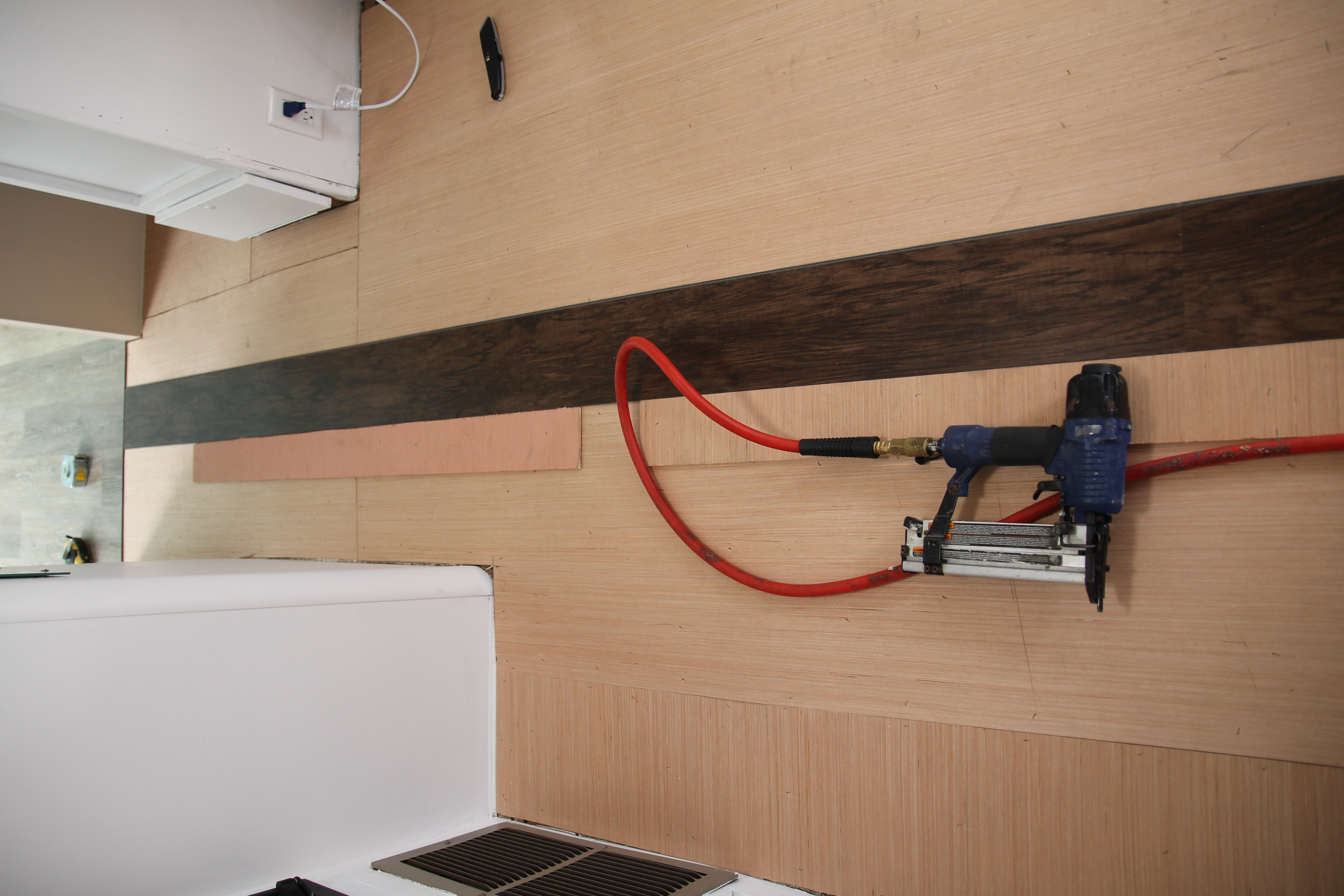 Here is some proof that it's so easy, even I could do it! 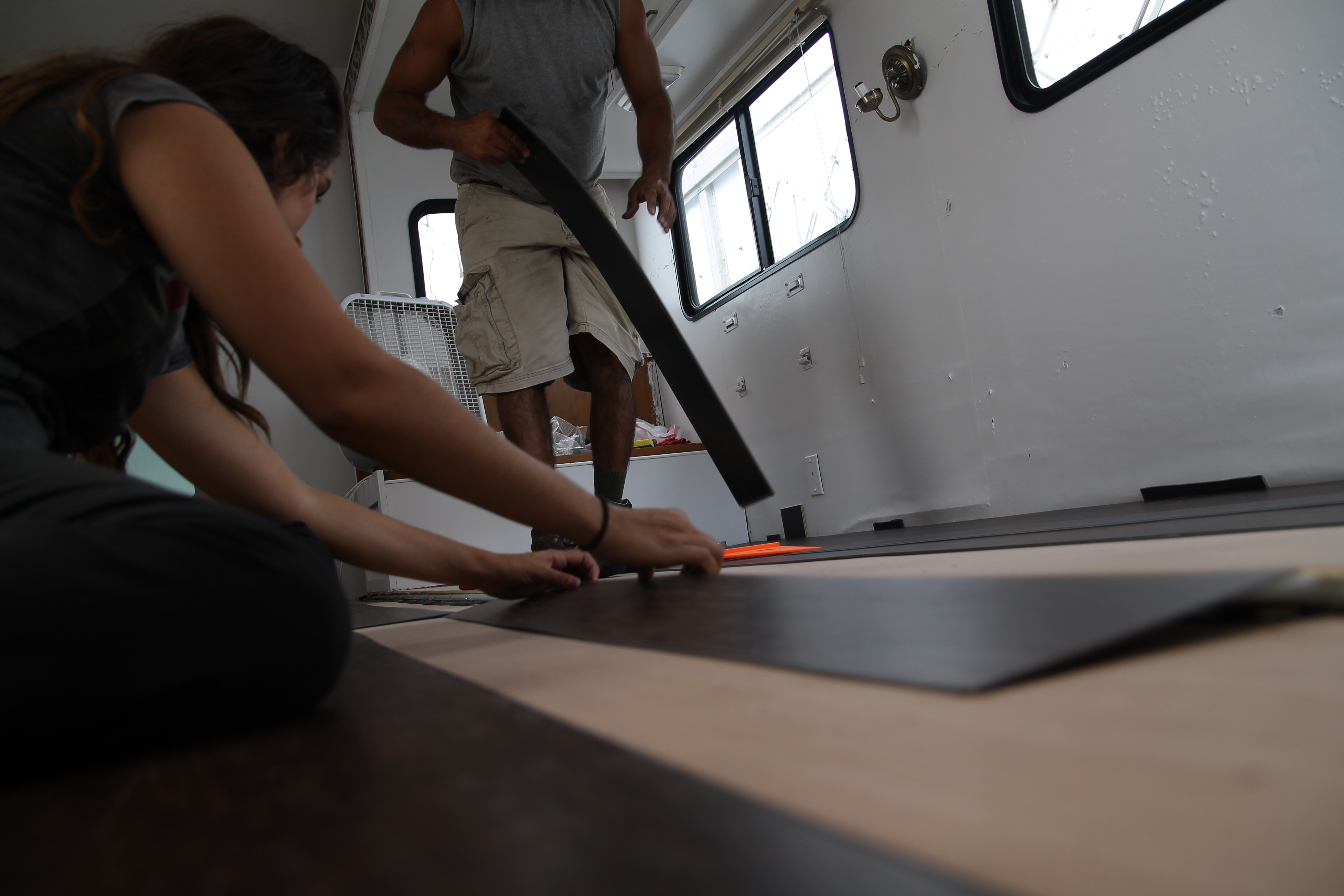 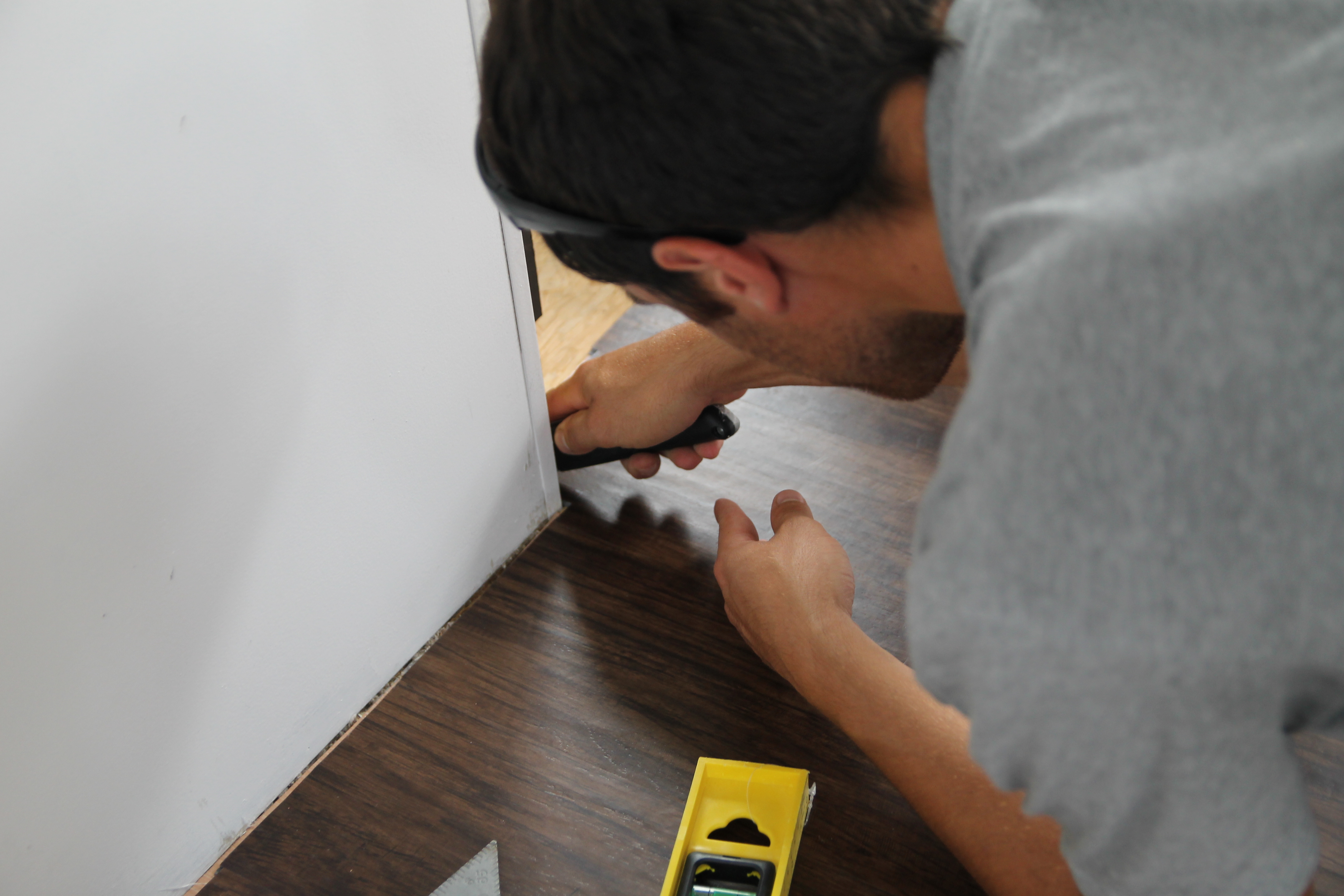 I did have to rely on the men to do the exacto knife cutting though. 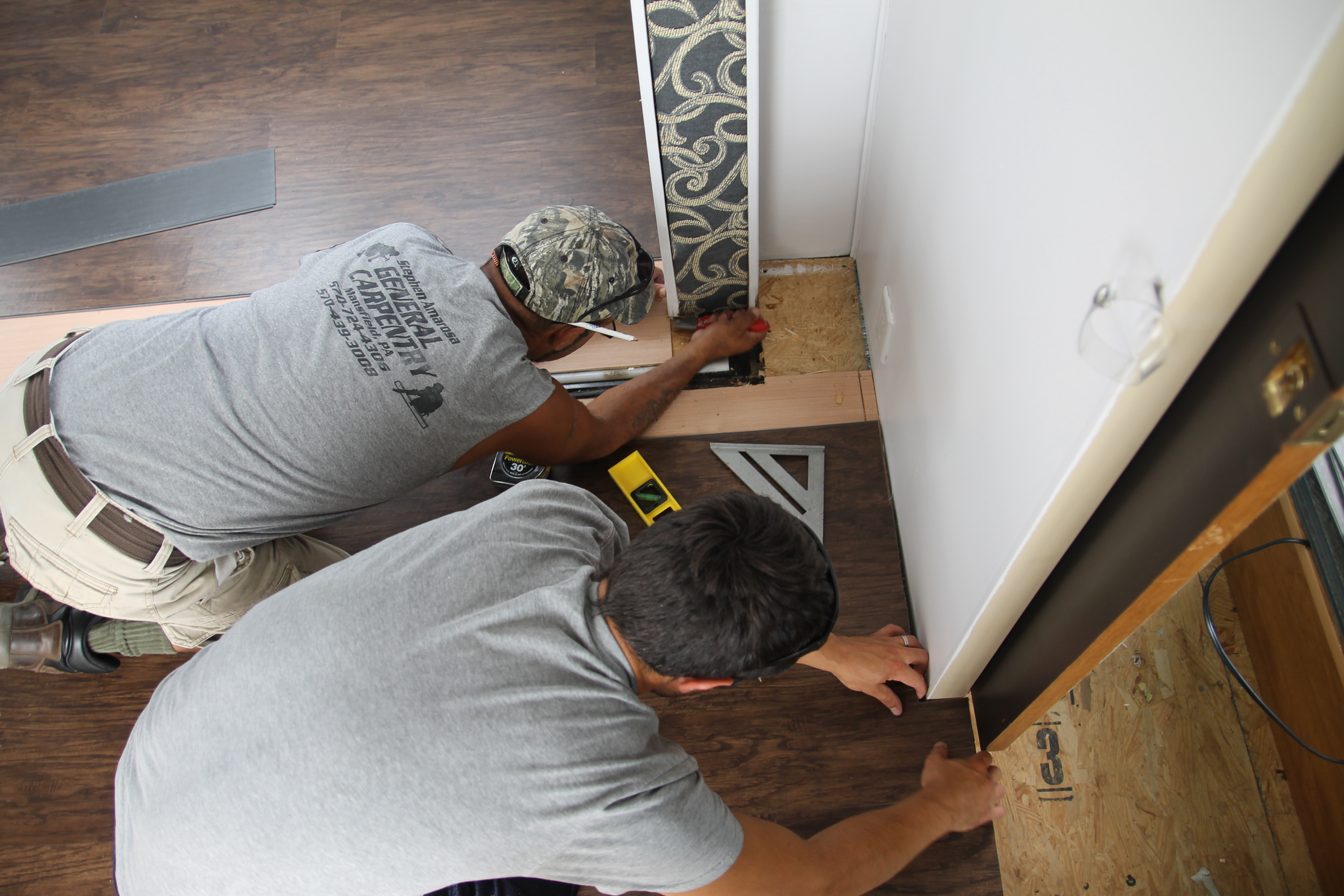 There are so many tight corners in a camper! Definitely be prepared to be doing a lot of awkward angle cutting and fitting when doing the flooring. 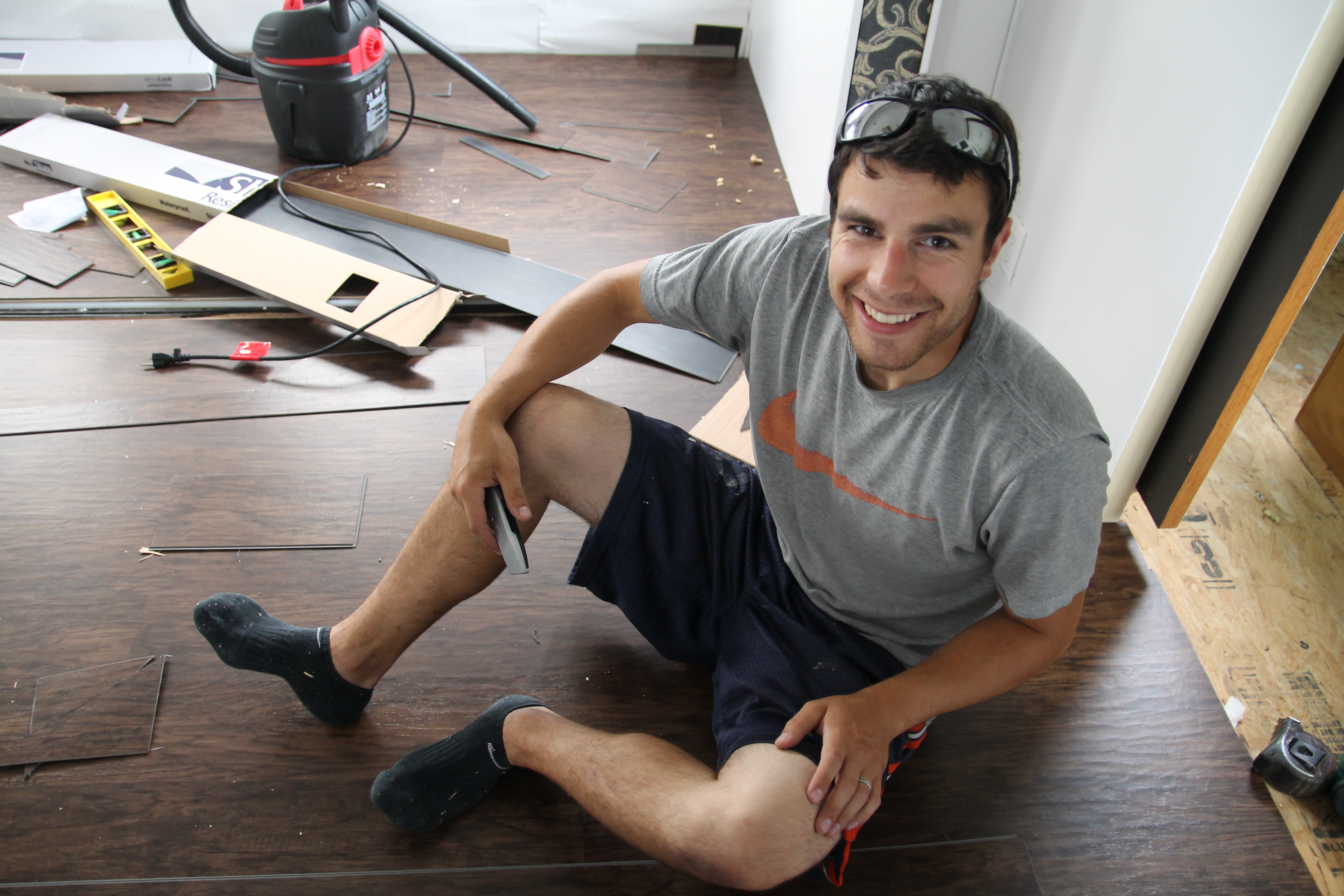 Getting so much done and it's actually looking good! Only a couple hours in so he's still smiling, haha. 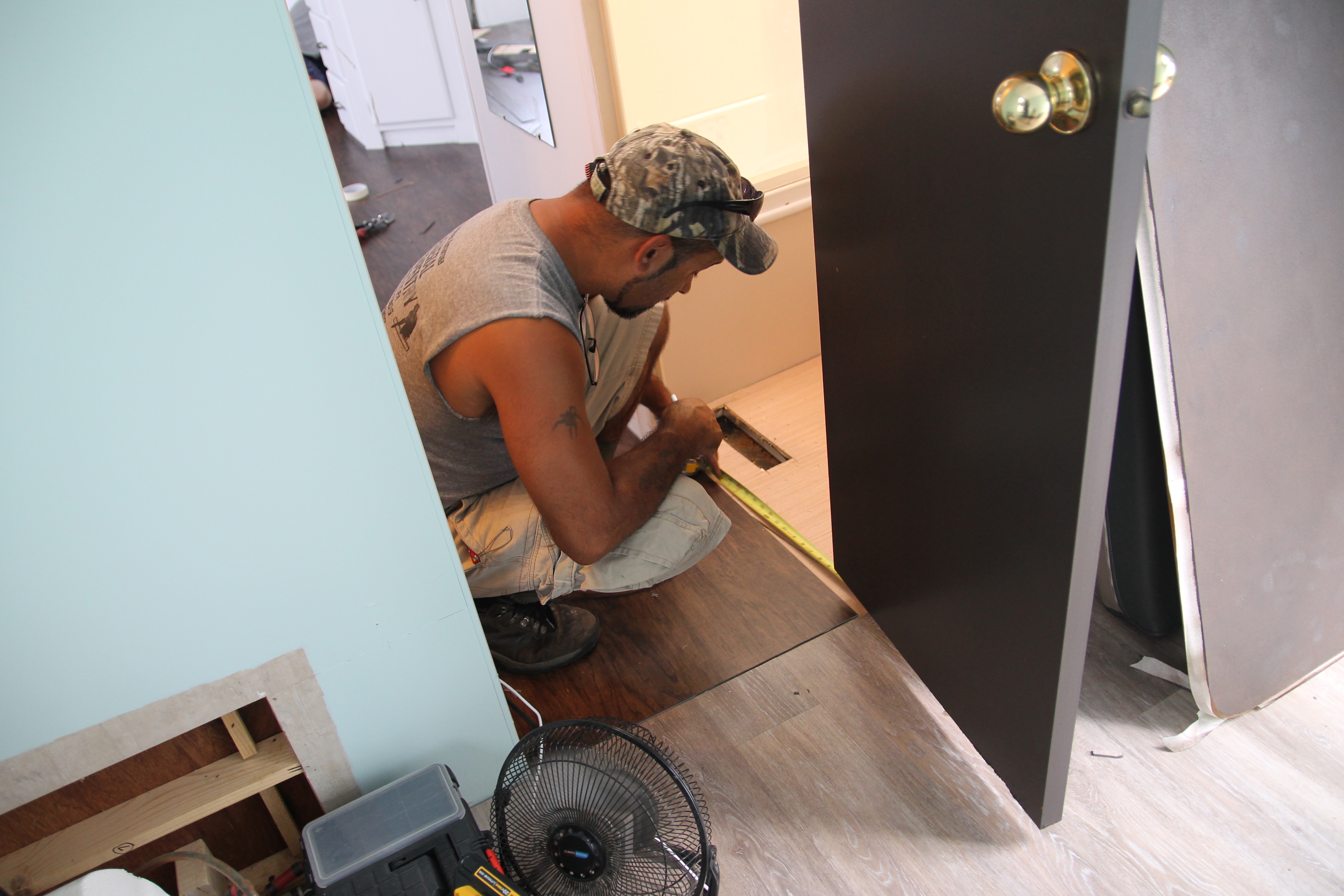 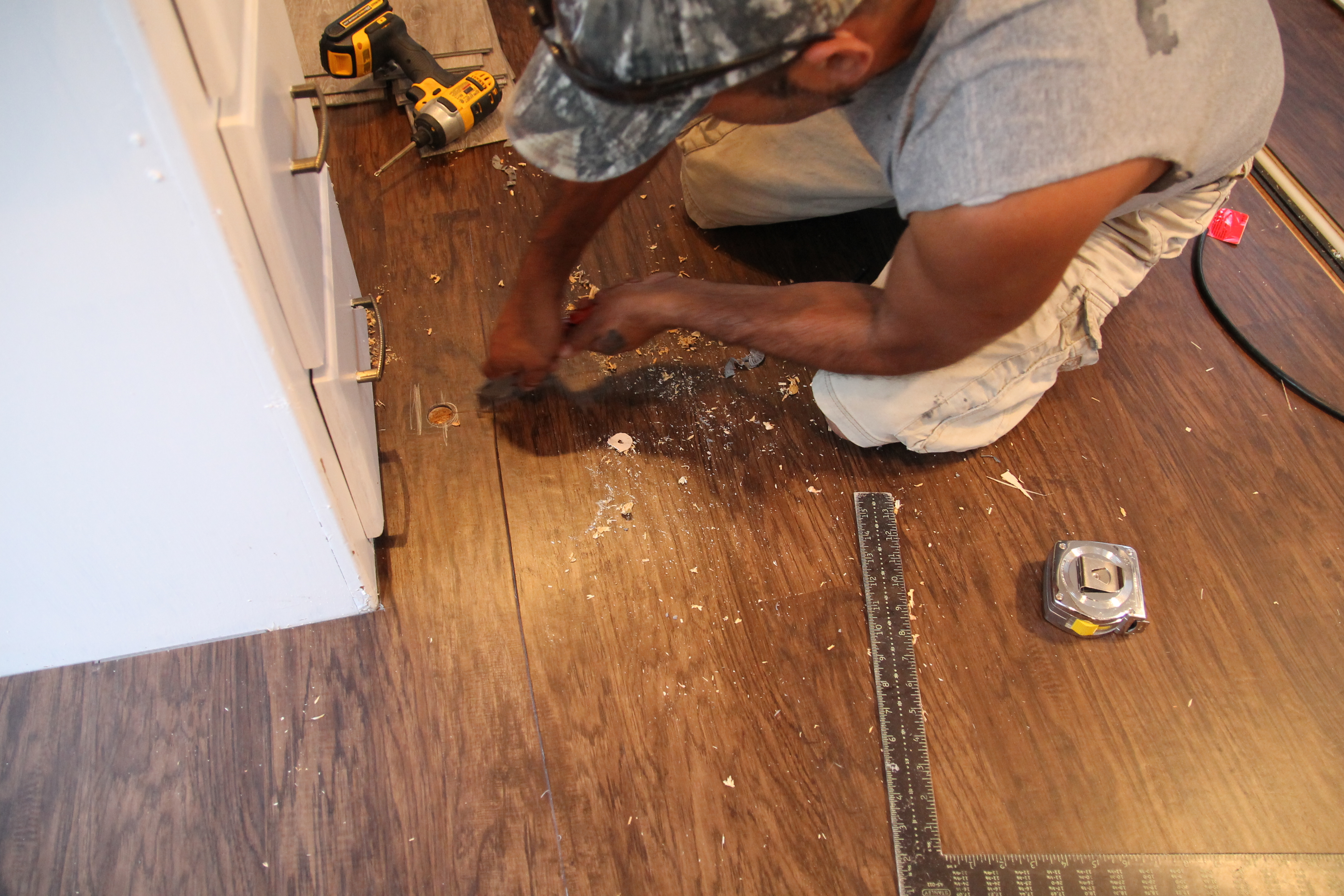 We kinda forgot about the heating register in the kitchen. Caused us some distress but we figured it out eventually. We remembered the rest of them! 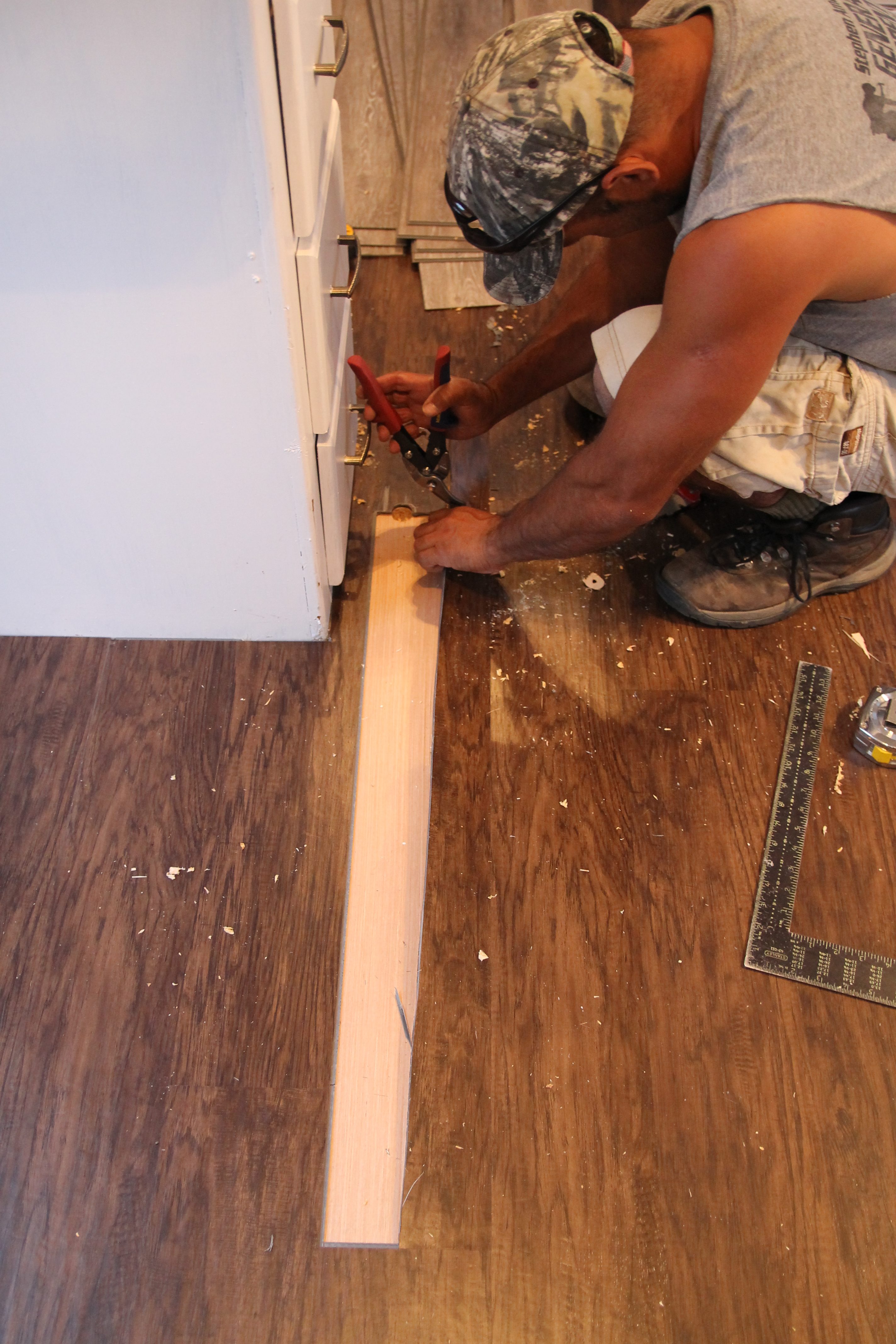 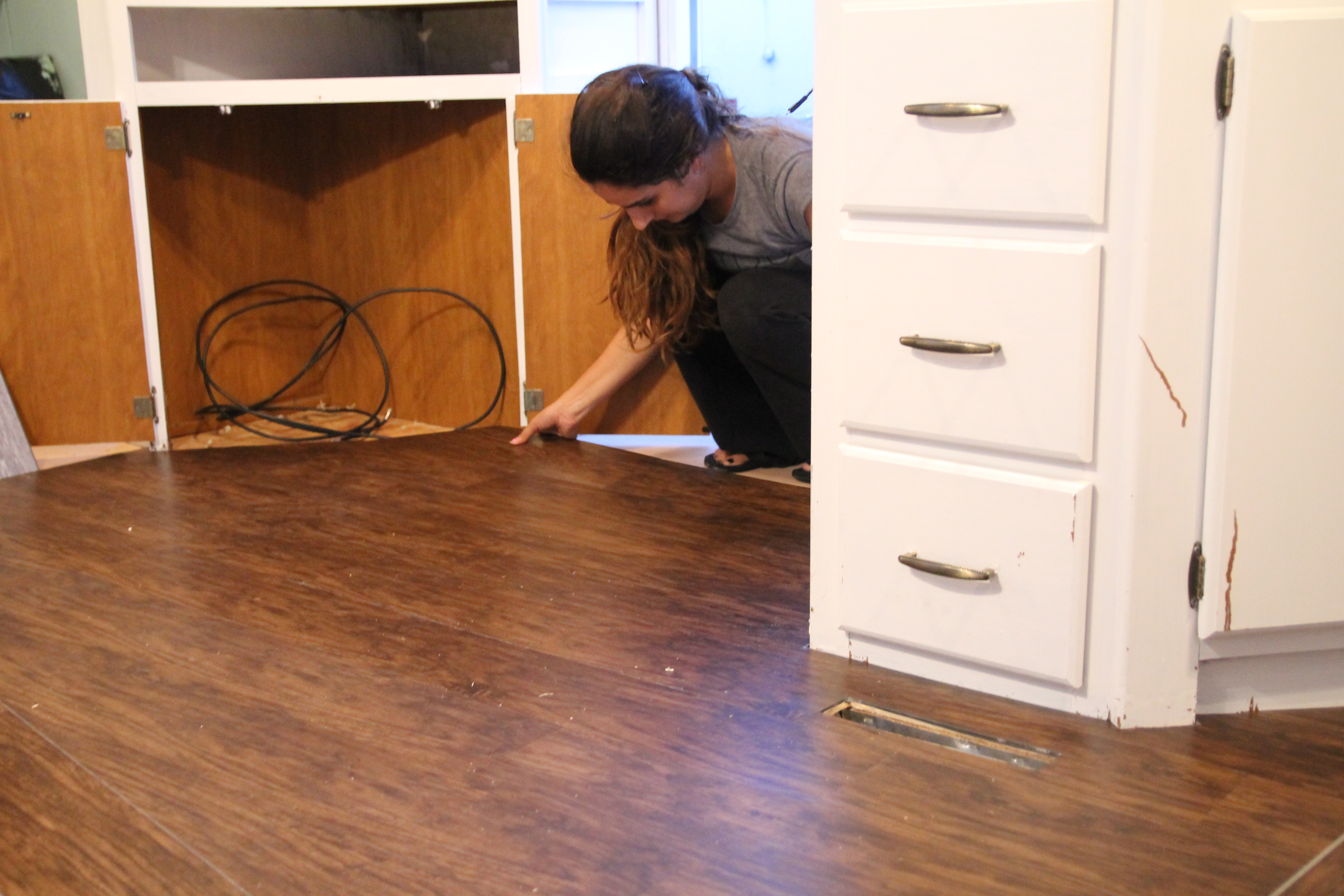 Putting the Luan board down caused some scratches to my paint job. I had to go back later and do a lot of touch ups! 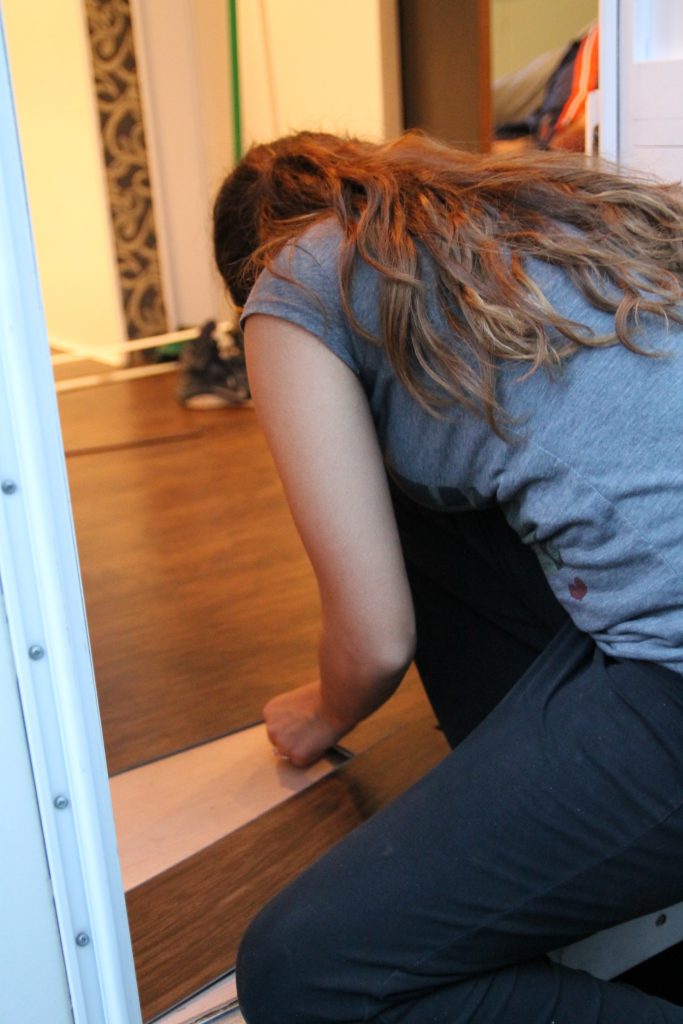 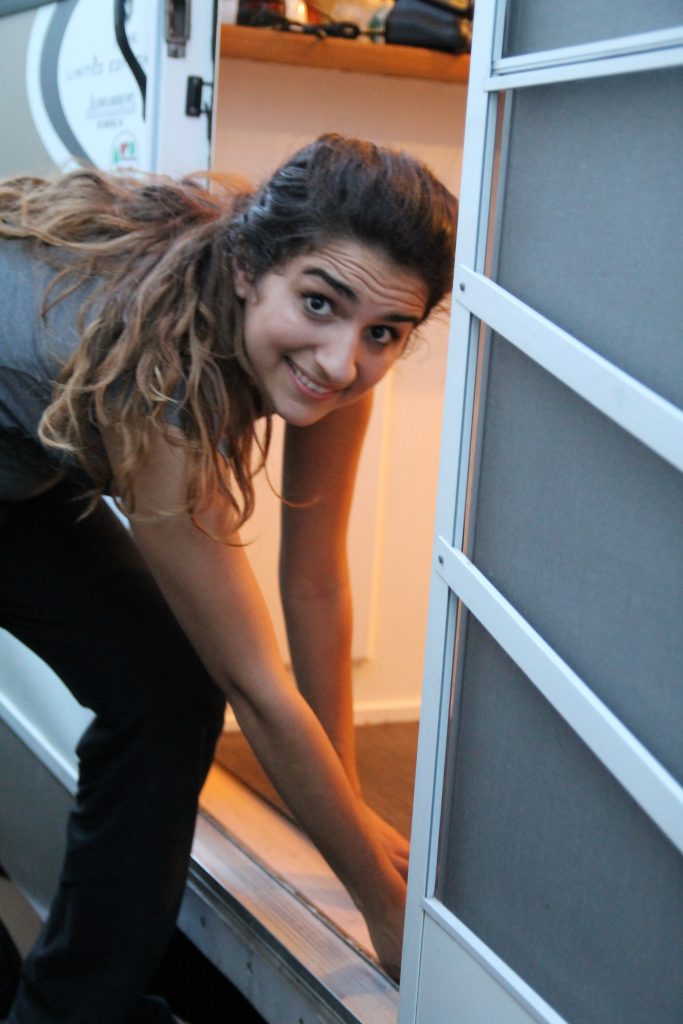 More proof that I helped! 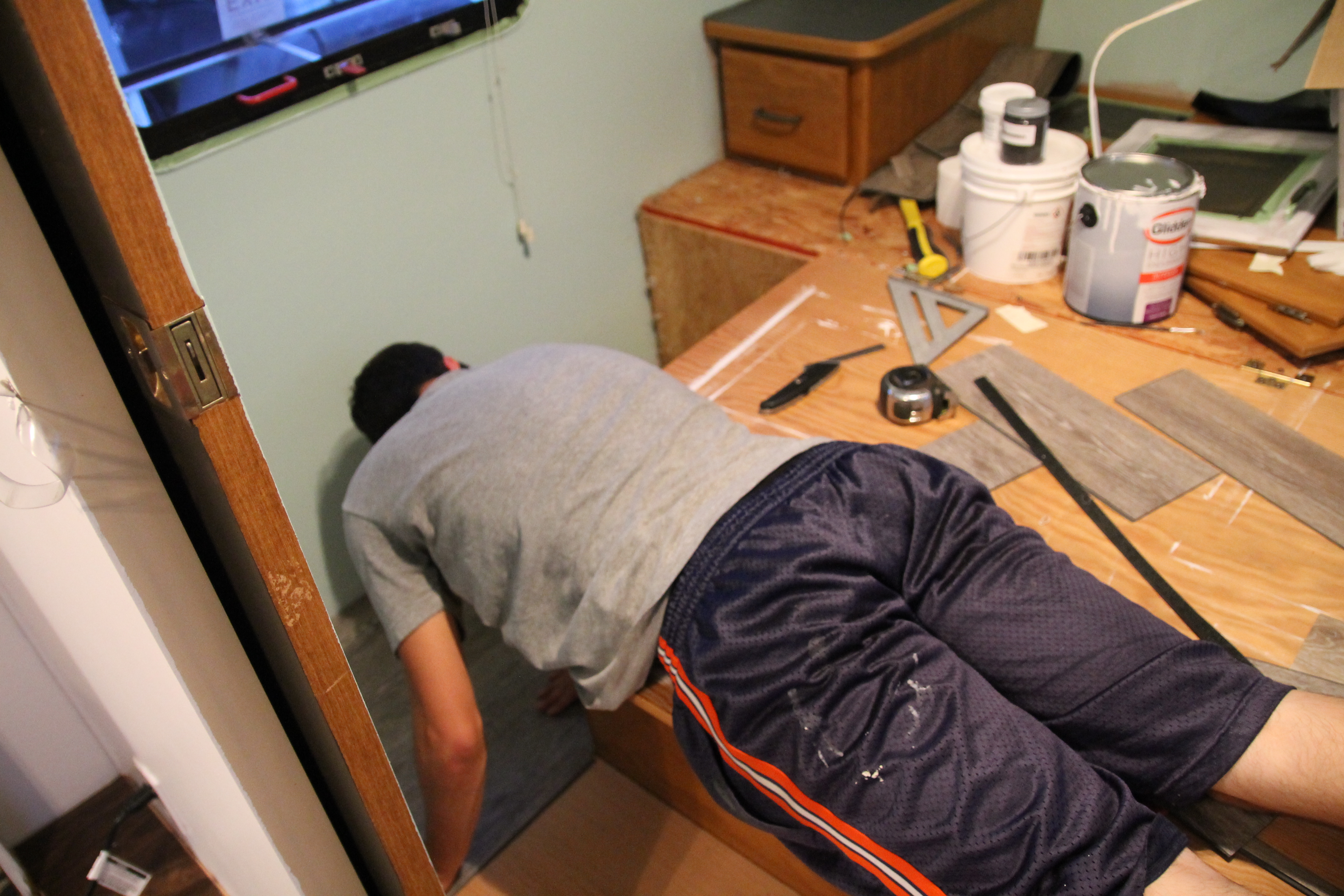 Even though the bedroom was the least amount of space that needed flooring, it proved to be the hardest and took the most time! It's a very tight space which is hard to move around in, plus it required a lot of cutting! 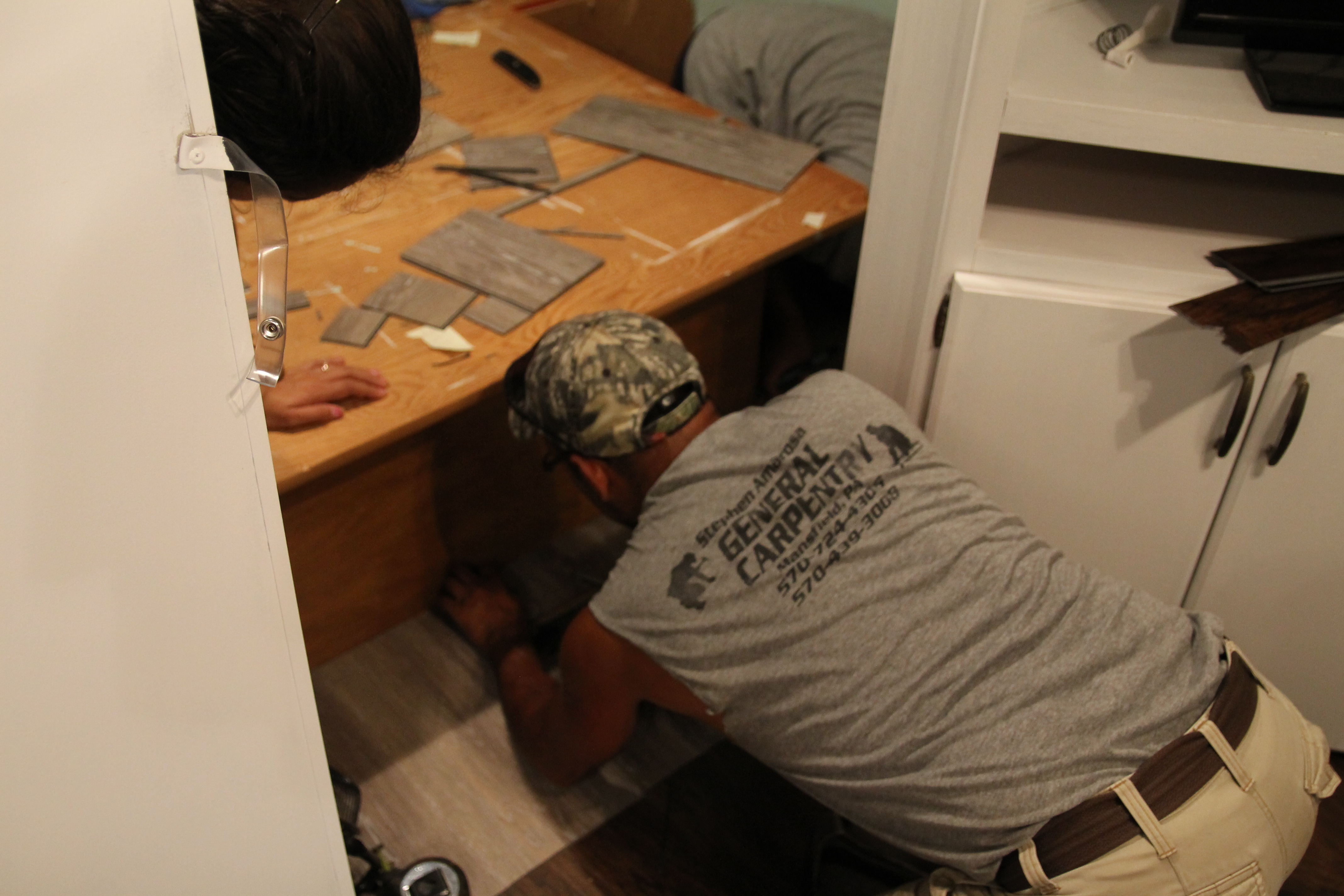 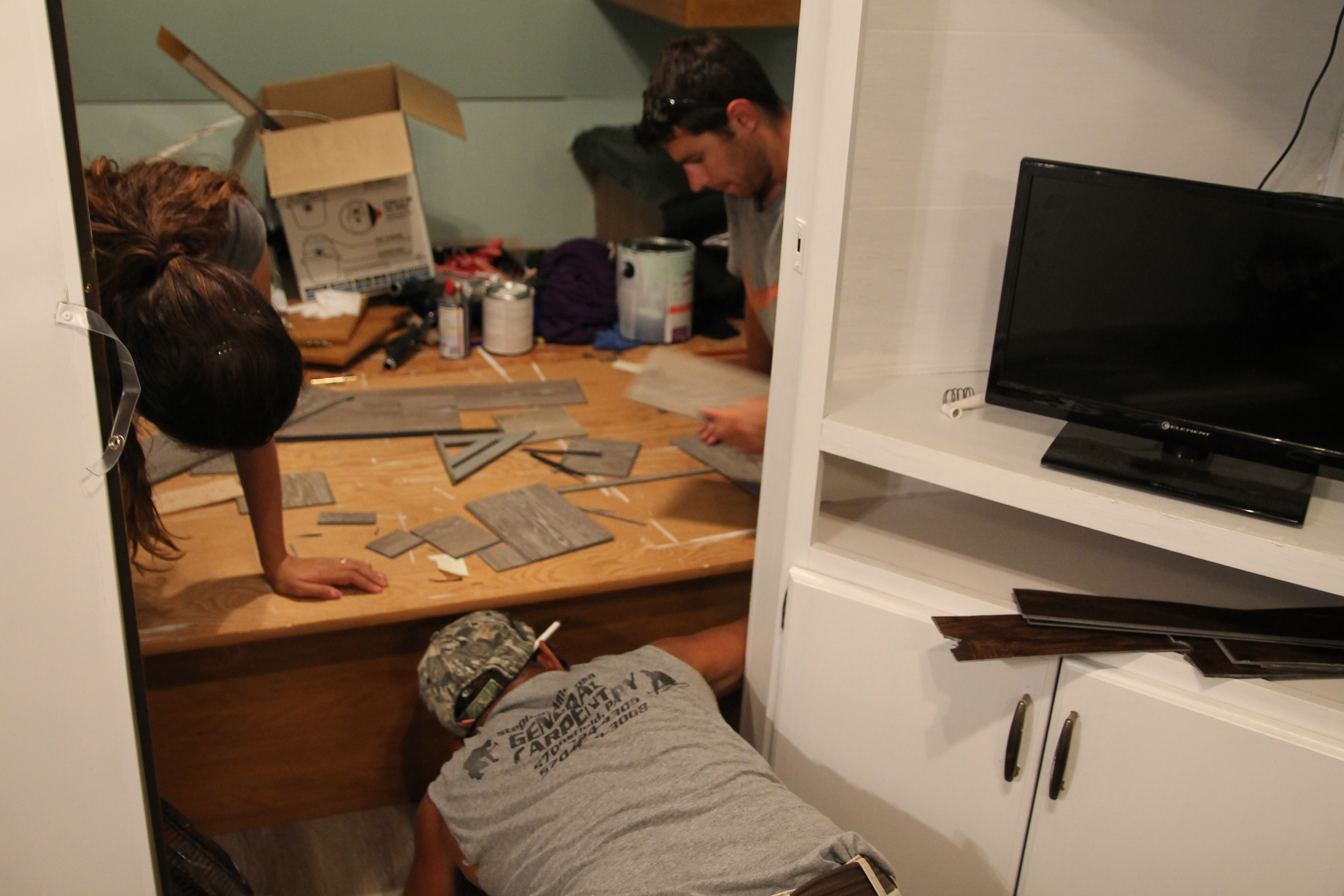 Thanks for tuning in and reading our LAST renovation post!! Be sure to go check out the Before and After Post we will be posting shortly to see the amazing transformation of this space!